An E6 Adventure for any number of players. 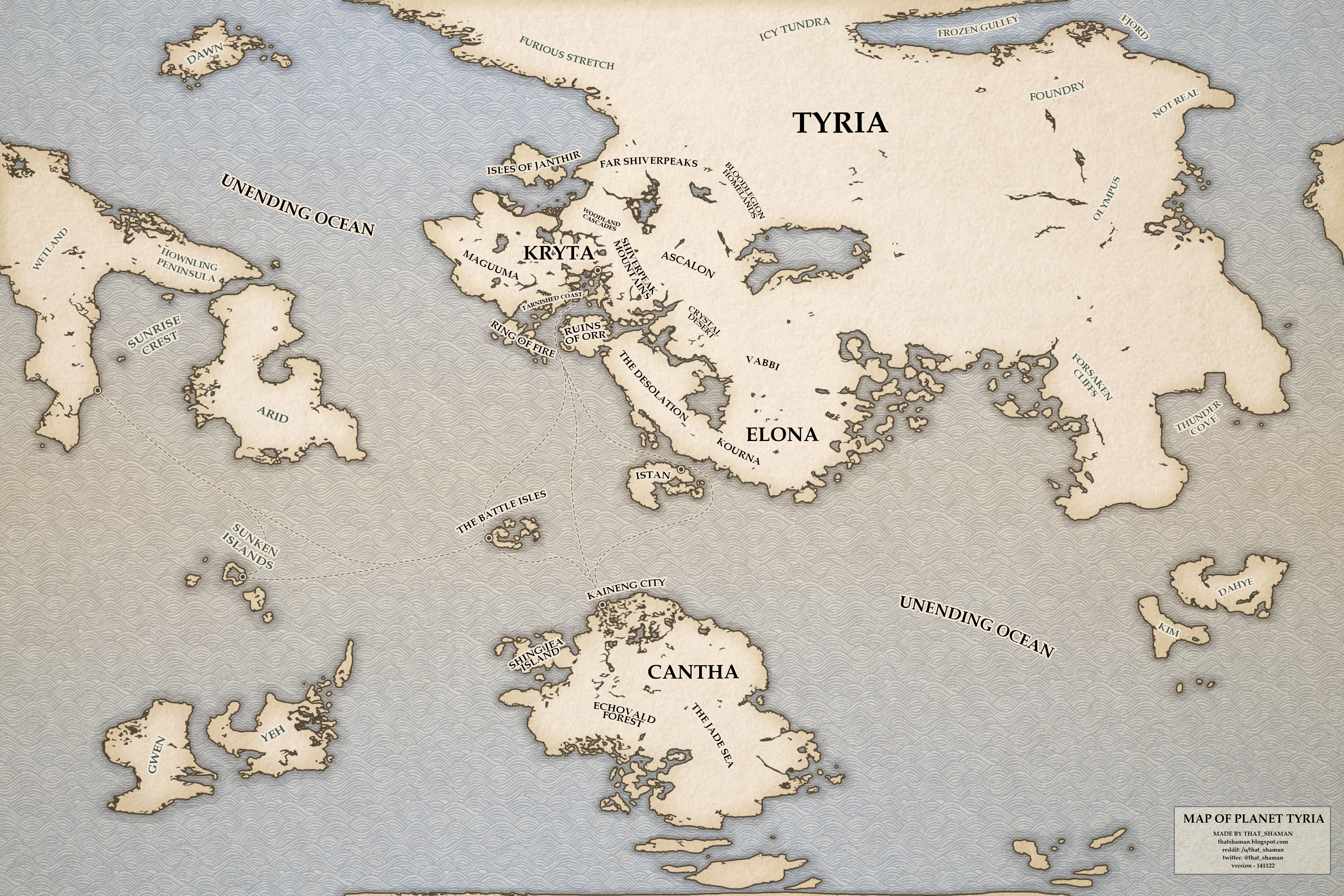 According to a New Krytan-labelled world map found in the Durmand Priory library, the world of Tyria is comprised of several large landmasses, chief among which is a supercontinent also named Tyria, which contains the familiar Tyria as well as Elona (although these two together only make up about a quarter of the supercontinent).

To the south is the continent of Cantha, whose north coast has undergone dramatic changes from 250 years ago. Now, Shing Jea Island is attached to the main continent via a land bridge, and there are inland lakes throughout Kaineng City, possibly relating to the Great Tsunami. The Jade Sea does not, from the map, appear to have reverted to water as expected, however it is possible that this is because Emperor Usoku and the Ministry of Purity have made it impossible to know Cantha’s internal geography.

The true age of the world is unknown, with the oldest records dating to the approximate extinction of the Giganticus Lupicus in 10,000 BE. This was the period of the Elder Dragons’ last time awake in which they drove the Giganticus Lupicus to extinction. Few records exist of that time, as only five sentient races are known to have survived – the dwarves, forgotten, jotun, mursaat, and seers. Of those five, only the dwarves and jotun kept records, but since then all five races’ cultures have fallen into ruin and only the jotun remain, though as savage, primitive forms of their ancestors.

At some still-unknown point in the past, powerful beings known as the Six Human Gods traveled to Tyria, bringing humanity with them and ushering a new age. Under the guidance of Balthazar, humans spread and conquered lands across the world. The oldest known nation of humanity being Cantha – first settled in 786 BE. In 205 BE, humanity traveled to the northern continents of Tyria and Elona, and established the kingdom of Orr and the Primeval Dynasty in their respective continents. Encouraged by Balthazar, humanity continued to spread across the world, waging wars with the native inhabitants and pushing them from their lands. In time, they established Ascalon in the land previously conquered by the charr and created many settlements in Kryta.

In 1 BE, Abaddon used the Bloodstone to grant magic to all the races of the world. However, this gift backlashed as wars between the races and people grew and intensified. King Doric of the Tyrian human kingdoms pleaded to the gods to take back their gift, and to do so the gods divided the Bloodstone into five pieces – each representing a different school of magic (Aggression, Denial, Destruction, and Preservation) as well as a keystone required to reunite the Bloodstones into one again. They then used Doric’s blood to seal the magic and dropped the bloodstones into Abaddon’s Mouth, the largest volcano in the Ring of Fire islands. Magic remained in the world, but greatly reduced in its power and efficiency.

However, Abaddon, had disagreed with removing magic and rebelled against the other gods. As they brought him down, the five gods created the Crystal Desert and the Desolation, and sealed Abaddon in his own realm, the Realm of Torment. Because of the devastation they caused, the gods left the world in the Exodus of the Gods.

Ascendant campaigns can view previous versions of their pages, see what has changed (and who did it), and even restore old versions. It's like having a rewind button for your campaign.

We've already been saving your edits, so if you upgrade now you will have instant access to your previous versions. Plus, you get a 15-day free trial, so there's nothing to lose.

I'm sorry, but we no longer support this web browser. Please upgrade your browser or install Chrome or Firefox to enjoy the full functionality of this site.